A Sense of Place 2 – Landscape Stories

“I take with me a camera and a single lens.  The pictures are made to try to evoke the experience of standing on the land and witnessing what one sees … to act as an antidote to the extraordinary technical wizardry of contemporary media presentations of the world around us.”

Locally-based Jem Southam is considered one of the UK’s finest landscape photographers, and became best known for his colour landscape images, using a large-format camera that recorded a very rich, clear level of detail.

Despite his own university students using digital cameras almost exclusively, he himself reluctantly switched to digital only very recently, when the supply of photographic paper he depended on went out of production. He says now that he has been astonished by the new possibilities!

I hugely admire his work because it is rooted in a very patient and contemplative attitude. For example, his series called Rockfalls began while he was standing on a beach on the Isle of Wight, waiting for it to be clear of people:

My attention was gradually pulled from the spectacle and roar of the waves to the trickle of sounds coming from the cliff behind me.  Remaining still and watching intently, I became aware of the tiny rivulets of particles that occasionally detached themselves from the face of the cliff to slide and bounce to the cliff below.  Every so often a larger rock would slip away and thud into the sand.  The longer I stood, the more I became aware that these processes were almost as frequent, though not as rhythmic, as the waves pounding the shore.

In his pictures you can almost hear both the waves and the slipping particles….

The somewhat out-of-date information on the website of the V&A Museum (which, along with the Tate Gallery, has exhibited and holds some of his work), says of him:

Jem Southam is renowned for his series of colour landscape photographs, beginning in the 1970s and continuing until the present.  His trademark is the patient observation of changes at a single location over many months or years.

Southam’s subjects are predominately situated in the South West of England where he lives and works.  He observes the balance between nature and man’s intervention, and traces cycles of decay and renewal.  His work combines topographical observation with other references: personal, cultural, political, scientific, literary and psychological.   Southam’s working method combines the predetermined and the intuitive.

Southam uses a large-format camera to produce 8 x 10 inch (20.5 x 25.5 cm) negatives that record a high level of detail. C-type prints are made from these.  When the pictures are enlarged from the negatives, under supervision at a commercial lab, they reveal an entrancing wealth of information.  Others are ‘contact printed’ (placing the negative directly onto the photographic paper) by Southam himself, deliberately to achieve a contrasting intensity and intimacy.

Like Mark Power [previous post], Jem Southam always works in series to build up a story and a portrait of the landscape he immerses himself in.  I have never come across anyone else with his style of working.  With the large format-camera he sometimes used such long exposures that he had time to go for a walk while they were happening.  His process results in images that I find very spacious and poetic, with a deep sense of calm.

Once at a lecture I attended (when he was still using his large-format camera), someone asked how many photos he took in a year.  He replied, ‘I don’t take photos, I make images, and I make maybe 15-18 in a year.”

Almost all his work involves bodies of water – locally river mouths in East Devon, a pond at Upton Pyne, a stream in Cornwall, and the River Exe around Bickleigh and Brampford Speke.  He is fascinated by subtleties of colour, reflection, transience, and the effect of shifting seasons and weather on the landscape.

It is hard to describe the impact of viewing his images, especially when exhibited very large (over 1m long) – almost as good as being in the place itself, in terms of detail.

Most recently – now with a digital camera – Jem Southam is carrying out an extended study of a stretch of the River Exe near Brampford Speke before dawn.  He is making images of scenes so dark he cannot see them with the naked eye, with incredibly beautiful results.  I am hoping he will be able to show some of these to the Club in the near-ish future – see here 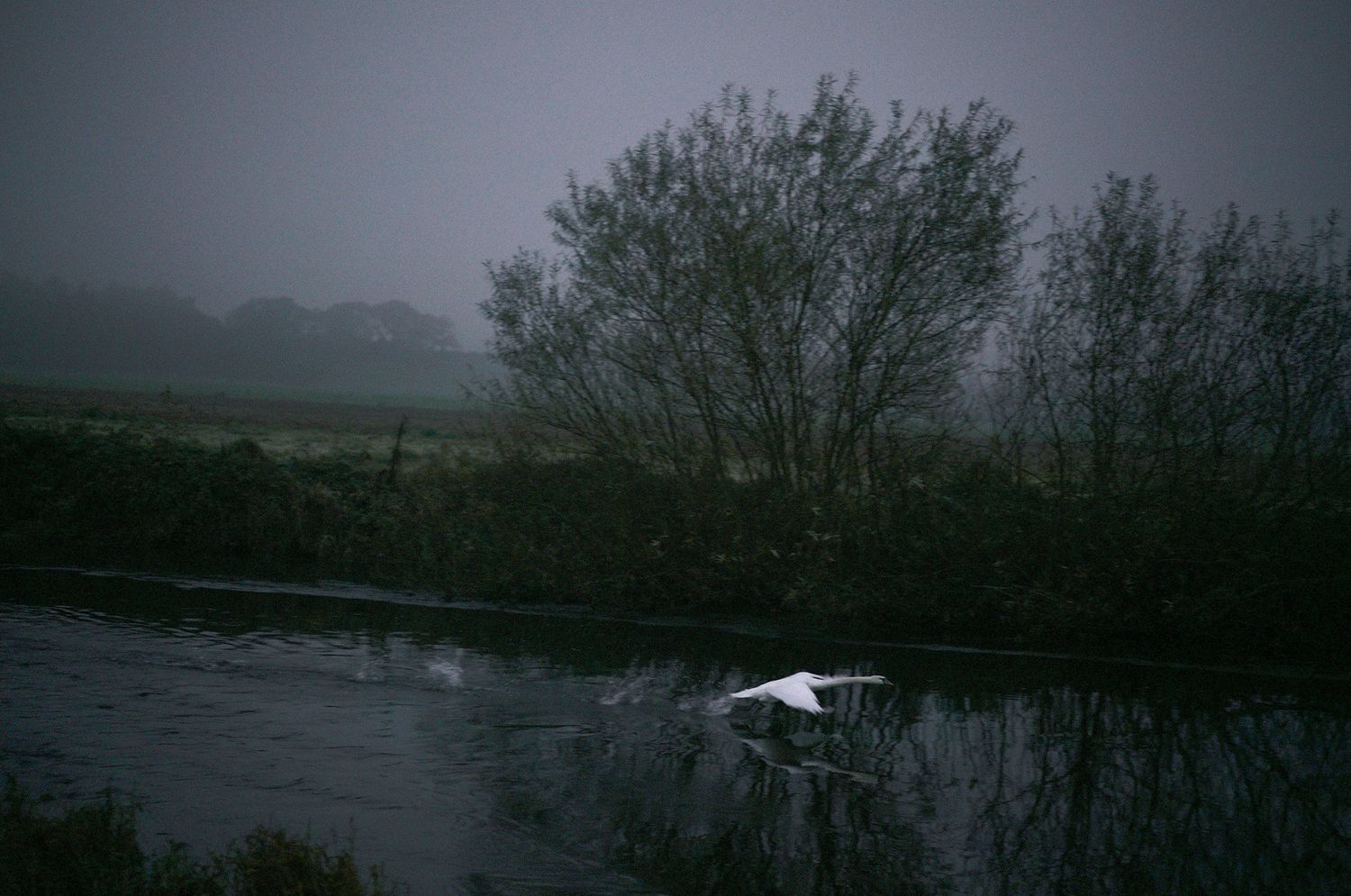 In an interview here, Southam says:

What I’ve learnt as I’ve worked through my life is that the process of developing a piece of work is actually led by the place itself.  In other words, there’s something about a particular place which makes me want to stop to take a picture.  Having done that once, for some reason or another I start sometimes returning, and if I return and make a second picture then I think I’ve got the possibility of building a piece of work here.  The process always starts by accident, there’s no deliberation saying I will go and do something or other….

Once the ball’s rolling, the fascination is then what’s this work going to be about – because I have absolutely no idea.  And the process of developing a relationship with the site leads that story.  And then the next and final thing is how am I going to shape a piece of work out of this. …. structuring a set of ideas into a new body of work…  The pieces of work don’t finish….

Jem Southam’s other most recent exhibited work is from a trip to New Zealand in 2018 – see here.

Base of a Rain Cascade, Milford Sound, New Zealand, Autumn 2018

In a short video here he describes his thought-process in this new-to-him landscape:

In my work I’m always questioning what it is about my relationship to the world that I share with others.  My work is an investigation into what landscape means, what the experience of landscape means to us as modern humans?…

I’ve spent the last 35 years walking locally up rivers and ponds of Devon and Cornwall …  Being offered the opportunity to visit New Zealand I found myself making pictures of the rivers, the streams, the clouds, the waterfalls, the sea, the ocean, the ceaseless movement of water.  Every piece of work I’ve ever done has been in relation to water…

I was focussing on a much more ephemeral experience of the nature of a landscape …  capturing the tiniest fragments of an experience …the whiff of a breeze whipping the waters from a waterfall….  I was trying to capture something of the moment of being immersed and completely wrapped up in … the experience I was witnessing.

I am increasingly appreciating the extraordinary wonder of what it is to walk the earth, to be present here, to experience and witness the many marvels …